What a great program. Ohio/local beers and sodas was a real hit. Bravo to the presenters; Chris Gudzinas, Craig Lane, Todd Knisley and Matt Lacy. Chris Gudzinas started the program with a nice collection of Youngstown bottles. His main collection of Renner beers was impressive. “The origin of eastern Ohio’s longest-lasting brewery had remained a mystery to this author until recently, when new information was uncovered. See all the pictures from the meeting by clicking on “Read More”. In Brewing Beer In The Rubber City, I stated that this brewery had been established around 1862, but it now appears that brewing operations began at the site somewhat earlier.  The tract of land on which the brewery sits was purchased in August 1848 for $50 by 45-year old George Harmann (also spelled Herman) and 38-year old John Brodt, two German immigrants. Soon after this, they established a small brewery at the site, where they were assisted by two other men, John Stoltz and Samuel Jeckell. The site was ideal for brewing beer: it was in a ravine where a spring flowed to provide pure water (in later years, several wells were dug which could provide up to 5,000 barrels of pure water daily); storage caves could easily be dug into the surrounding hillsides; and the site was immediately south of both the Pennsylvania & Ohio Canal and the Atlantic & Great Western Railway tracks, the latter being a main line through the area.” You can read more about the history of Ohio breweries in the new book, “Brewing Beer In The Buckeye State, Volume I” by Dr. Robert A. Musson or on Ohiobreweriana.com. 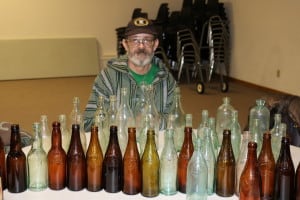 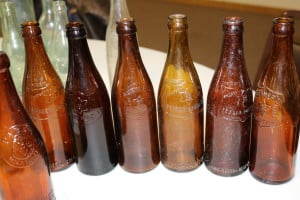 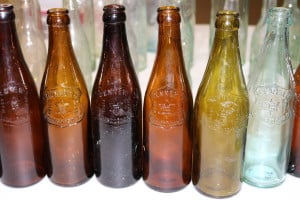 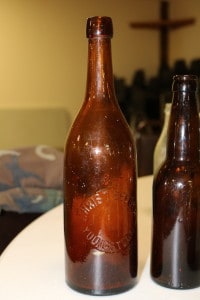 Craig Lane followed with painted label sodas from Bayer Peoples Bottling Co. There was very little on the internet about the history, but I was able to find the following bits of information. “Originally known as the Peoples Dairy Co., the plant was founded a block away on Bellows Street. Proprietors Fred W. Fuchs and Charles P. Kennedy incorporated it for $75,000 in 1924 as a sister company to the Peoples Bottling Co., which operated at 880 Grant St.” “Upon his return from service to his country, Ed Bayer returned to Akron where he, along with his fraternal twin brother, Frank, managed the family business, Bayers Beverages, until it was sold in 1968.” Ed was born in 1928.  It would be interesting to trace this history. When did the Bayers become involved with the People’s Bottling Co.? 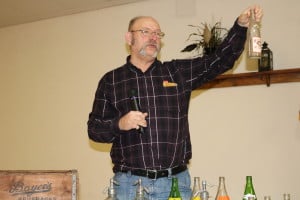 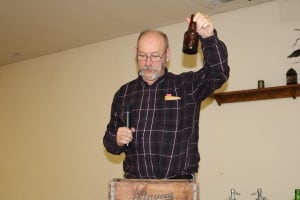 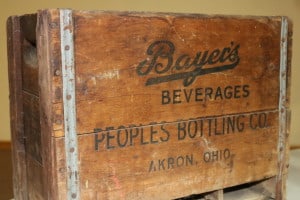 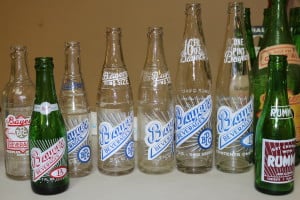 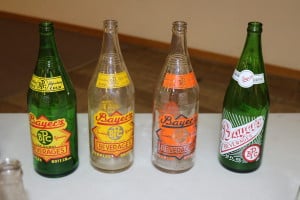 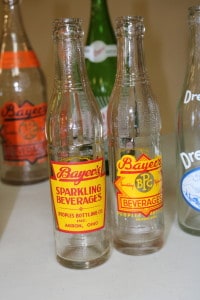 Todd Knisley had an impressive table of Canton embossed sodas and beers.

Todd did share an interesting history of North Canton. “The Community of North Canton first began as the Village of New Berlin in 1831. The first 23 lots were established at an angular intersection of Market Street, now called Main Street, and Portage Street. New Berlin was the first village to be plotted in Plain Township, one of the original townships created when Stark County was organized in March of 1809. Even though the residents were primarily of German descent, they decided, during World War I, that the community’s name needed to be changed. In January of 1918, New Berlin became known as North Canton.” 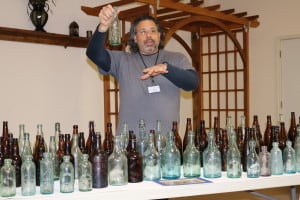 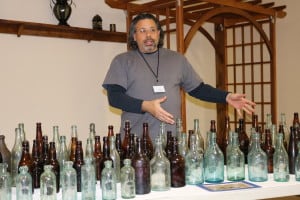 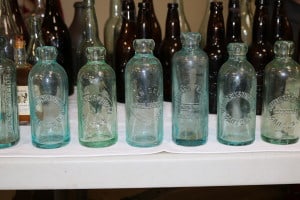 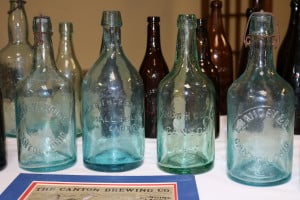 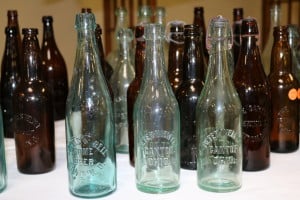 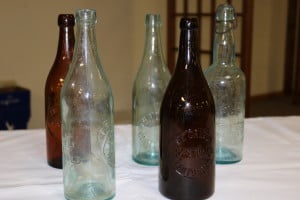 Matt Lacy then concluded the evening with some great dug bottles from the Astabula area. He also had a rare Painesville, OH bottle. His 3 Fargo stoneware bottles (2 ginger beers and a root beer) were dynamite bottles. The red labeled ginger beer on the right was particularly rare and interesting. 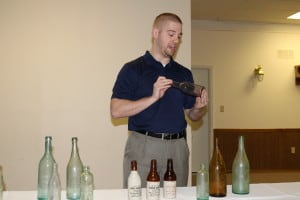 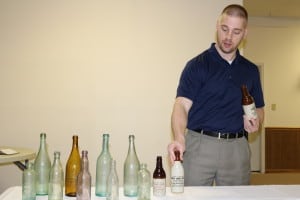 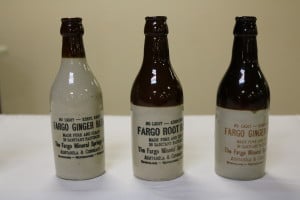 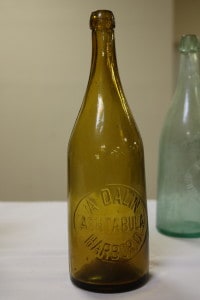 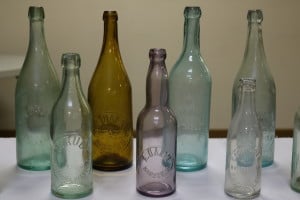