One of our very own club members(Ohio Bottle Club) was filmed for an upcoming HGTV special on “The Revolutionary War On The Tuscarawas – Fort Laurens Encampment”. Todd Knisley joined OBC members at the Hartville Flea market on Saturday July 9th to participate in the club membership drive. He stayed until a little after Noon and then packed up to join the 8th Pennsylvania Regiment which is part of the Brigade of the American Revolution, in Bolivar. The 8th Pennsylvania is a group of American Revolutionary War reenactors who meet to give impressions of 18th century military life. Todd was invited to participate in a reenactment at Fort Laurens in Bolivar Ohio. Todd was honored as being the only non-regimental member invited to be in attendance at the two-day event. As seen in the photos, Todd took Revolution era bottles that spanned from the French & Indian War, the American Revolutionary War, and the War of 1812, to not only show what items of the reenactment period would have looked like, but to show the transition before and after the period.

Todd was quoted as saying “I was excited to be invited by Commander Robert Cairns to attend the Fort Laurens encampment. I was able to take bottles and glass that ranged from 1750-1820’s showing the diversity of bottles in those time periods. It was especially good timing to have a new OBC member banner to hang on the front of my table while there. Many people took photos of the banner, my table and me during the event which was open to the public and also attended by several out of state brigade units. Alan did a nice job on the banners that we used for the first time at the Hartville event just an hour before.” Todd went on to say “I spoke to well over one hundred people directly over the two days, and was overheard by hundreds more. I answered questions about specific bottles that were on my tables, and demonstrated common uses for the items I had brought. I was completely surprised when asked to sign a television release form for HGTV who was on the grounds Sunday to film a special about the event.

After the excitement of the HGTV crew wanting to know what Todd was doing and speaking on for the weekend, he was then approached by a film crew from the Ohio Historical Society and asked to do an on-film interview and explanation of his tables of artifacts. Todd said “I was tired from setting up, tearing down at Hartville and then Fort Laurens, and then the same thing again on Sunday. I was losing my voice from talking to so many people and the OHS crew filmed me late in the event on Sunday and it was all I could do to be legible and make sense.” Todd went on to say “I gave away actual glass cullet and manufacturing shards from the Wistarburgh Glass Works which operated from 1739 to the 1780’s. I had two mid-17th century signal cannons, two 1750-1820 medical bleeding cups, an actual blow pipe along with some great early bottles. The people who attended were history buffs just for coming to the event, so I was a big hit due to having actual period relics on display. I was also invited by the museum director to give a presentation to the Zoar Historical Society at a future date. All-in-all it was a great weekend not only for myself, but the club and hobby as well.” 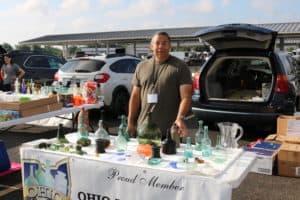 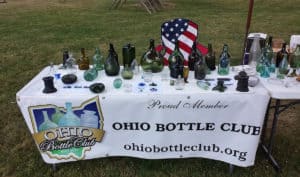 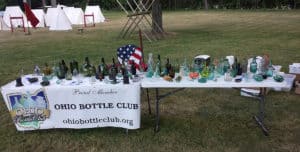 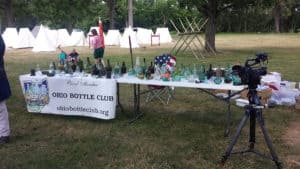 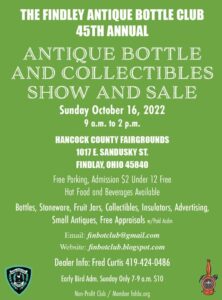 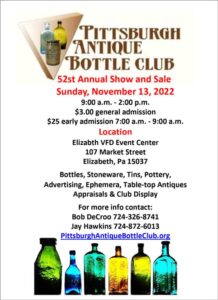